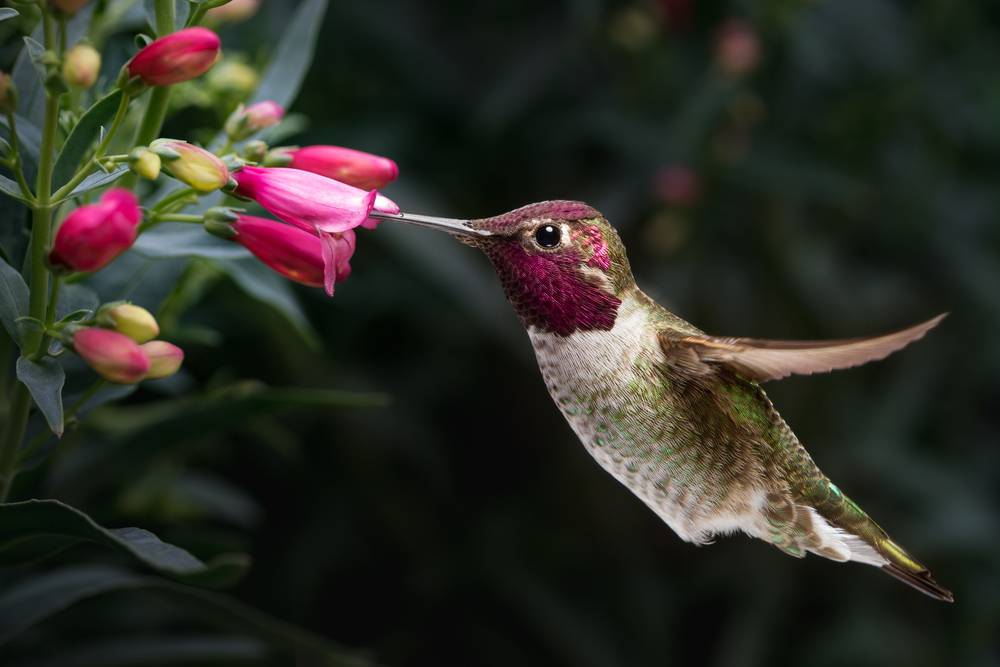 Hummingbirds are known for the length of their beaks. They use their long bills to reach the nectar in flowers. It leaves us wondering though, how long are hummingbirds beaks?

If I ask you to describe the hummingbird beak, you would probably point out the needle-shaped long beak. But this is not exactly true as there are some species of hummingbirds that have curved beaks.

Why do Hummingbirds’ beaks have different lengths?

There are over 350 different hummingbird species with all different lengths and shapes of beaks. More than 300 species of hummingbirds are found in South America.

Beak length and shape vary because each type of hummingbird has evolved over time to be able to get nectar out of a specific flower.

Not all flowers are created equal, therefore not all beaks are either.

For example, the lucifer hummingbird’s bill is curved to increase its efficiency of collecting nectar from agave flowers.

Whereas the sword-billed hummingbird has the longest hummingbird bill at around 4 inches. This beak has evolved to best reach the nectar in the flower species Passiflora mixta.

A hummingbird whose beak best fits the flowers they feed off can drink faster and more efficiently from those flowers than hummingbirds whose beaks are different lengths. This allows for easier and quicker feeding. It also helps to narrow down the competition.

Check our trending post if you are wondering where do hummingbirds go at night?

Do Hummingbirds Use Their Beak To Sip Nectar?

Since their beaks are so long, many people think that hummingbirds use it as a straw to drink nectar. However, this is not true.

The beak is more of a protective shield for the bird’s tongue than it is a straw for them to sip out of. This is because hummingbirds actually use their tongue to drink the nectar, not their beak.

The beak simply provides a safe passage for the tongue to get to the nectar.

The bird sticks its perfectly shaped beak down into the flower where it then sticks its tongue out and uses the process of capillary action to draw the nectar into its mouth. It then quickly draws its tongue back in to swallow the nectar.

Are Hummingbird Beaks Fragile Due To Their Length?

Since a hummingbird’s beak is so long, it often leaves people wondering if it can be easily broken.

In fact, many male hummingbirds will use their beaks as swords to stab other male birds in the throat during combat. They do this to protect their claimed areas during mating season.

The long-billed hermit hummingbird has actually evolved to have a “weaponized beak” that is meant to fight off other birds. This beak is not as good at collecting nectar though.

Compared to most birds, hummingbirds have exceptionally long beaks.

The length and shape of each hummingbird’s beaks correspond with their specific needs.

In general, though, their beaks are shaped like other bird’s beaks, just a lot longer.

What are hummingbirds beak called?

I have always seen people referring to hummingbirds beak as needle but if you are an expert you know that it is referred to as bill.

Sometimes the same beak is also referred to as maxilla. The term “Maxilla” is an official work that is use to refer the top of the hummingbird beak.

Hummingbirds do have a long beak but at the same time, they too have long tongues. The “hyoid apparatus” present in hummingbirds allows them to stretch their tongue double the normal length.

The “hyoid apparatus” help them draw nectar from longer flowers.

Can a hummingbird open its beak? This is one of the questions that most people usually ask me, if you look from far you won’t notice any opening of the beak during the nectar sipping but a slow-motion video of a hummingbird sipping nectar would answer your question.

However, when hummingbirds catch insects they do open their beak to execute the catching. They move their jaw downwards and their beak opens slightly.